The best way for me to review the latest DCC RPG module “#81: The One Who Watches From Below “ is to just mention that #6 on the random encounter table is “Laser Harpies”. If that’s not enough, then you should know that this table also includes vat-grown Halfling hybrids, Eye Slime, and a Double Cockatrice (the description of which actually includes the sentence “The only thing more fearsome than a Cockatrice is a Double Cockatrice.”)

If that somehow isn’t enough information for you to make an informed decision on this purchase then A) reeeeally? and B) okay, fine, here’s a real review: 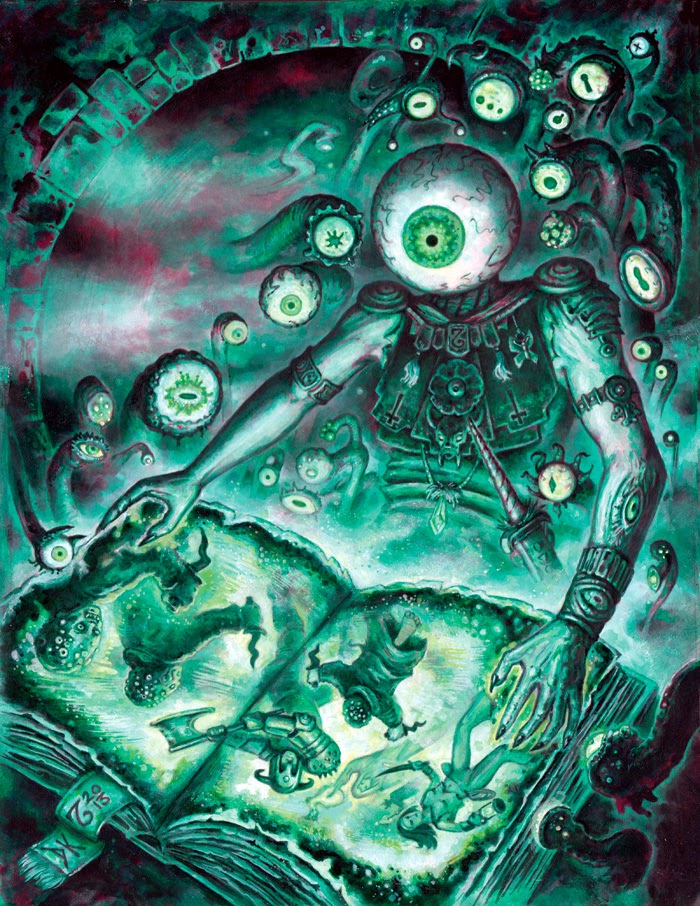 The One Who Watches From Below is an adventure for 6-8 1st level characters. It takes place in a mystical cave where curious seekers go to zone out on the herbals and receive prophetic dreams in exchange for a sacrifice of coin and gem.

But where does all the money go? Xenu?

Adventure hooks are offered, but you shouldn’t have too much trouble working with that setup. The mention of a cave full of unconscious people and their valuables should be enough to awaken the mystical and/or larcenous curiosity of any DCC RPG PC worthy of the acronym.

The area itself consists of four levels: the dreaming cave, a temple dedicated to the Elder God who makes those prophetic dreams possible, a laboratory where vat-grown experiments are created to assist in the running of the complex, and an Undertemple.

The Walls Have Eyes.

The twist that makes this adventure memorable is a particularly gnarly curse called The Curse of the Emerald Eye. Basically, it causes the afflicted to fall into a coma while their eyes (and consciousness) separate from their body and are free to wander the map, merging with and moving along the floors, walls and ceiling in a manner familiar to anyone who’s played The Legend of Zelda: A Link Between Worlds. Think of it as having your character turned into a Wizard Eye spell, but along a two-dimensional vector more like a Magic Mouth. You can even move them onto the bodies of nonsentients like rats and spiders, if you want to take your fantasy body horror to Cronenberg status. The lower levels of the map are filled with these eyes, and that is gross and great.

Cursed characters lack a physical mouth and therefore it’s suggested that the player finds alternate ways to communicate (via blinks and other eye movements). The inside cover even includes a cutout that can be used to cover the player’s face like a reverse domino mask, which gives this adventure the dual distinction of being the only module I’ve read that references the cutout mask gimmick from old Frankenberry boxes, and also the only one where getting a papercut on your eyeball is part of the peril.

So, that’s all pretty far out. And it’s not something I’ve ever seen before. So I like it. On the other hand, at least one character kinda needs to get the curse for this module to work. In fact, it relies so much on the curse working that it provides a way to force it on at least one PC. I can’t help but see that as a player fucker. And though it’s a good-natured one, it’s still a questionable design choice.

That’s because there’s a real possibility the curse will overstay its welcome. “Remember that time my dude was cursed and spent the session being a pair of traveling eyeballs?” is a good gaming memory, whereas “Remember those four sessions where I wanted to play D&D and wasn’t allowed to talk during the game because I was stuck being a stupid pair of eyeballs and it sucked?” is less of one. The module addresses this, but the solution (just skip to the end) feels a bit hacky to me.

There’s a room where the curse can be lifted, but it seems to me it might be better to call the curse something like “Renegade Eye Sickness” or “Ocular Betrayal Syndrome” and just make it last for X number of turns. Doing so, however, would blunt the terror that a PC’s eyes might become trapped here forever amongst a thousand other pairs of eyes.

As a judge, and very likely as a player, your enjoyment of this module will depend on which side of the teeter-totter you come down on. While I still chafe at forcing the curse on a player, I do think the mechanic itself is pretty cool and would want to find a way to make it work without dragging it out over multiple sessions.

Apart from the curse, the module itself is flavorful and features some fun enemies. The guy on the cover makes an appearance, as does the aforementioned Elder God (Remember, 1st level adventurers, if you encounter an Elder God, guild protocol dictates that you RUN THE FUCK AWAY).  Incidentally, page 17 says that the Vault of Eyes contains a +1 Vampirebane longsword named “Sparklefang” but I crossed that shit out immediately. So should you. Jesus.

The One Who Watches From Below really pulses with a primal Appendix N vibe, while still feeling fresh and original. It’s like someone handed a kid all the green crayons and asked him to write a story for Weird Tales. I like it a lot, despite my misgivings about how the curse is dealt with. Even if my description of the curse bums you out, I’d still encourage you to give this one a shot. The second wave of DCC RPG adventures seems to be further distinguishing the game as a lurid, cosmic Swords & Sorcery game, and this one is no exception. It’s gross and weird and full of slime that’s okay with me.

Plus, this is a module that actually contains the sentence “Drinking fetus water has no ill effects and actually promotes healthy hair and fingernail growth”. That’s probably worth six of the ten bucks I paid for it right there.